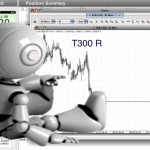 As known to users of the Calculation Exchange rates T300 series, the main signal of decline over the medium term was provided in July 2014 to share 1,3470. The market in recent months has brought on intermediate supports, first place in area 1,2500, level from which rebounded up to 1,2880, This downward movement took to realize 10 figure ( about 1000 Only ) little less than 5 months. In December, we have witnessed an acceleration of the movement, in fact little more than a month we have gone from a max ( calculated from T300 to 1,2550/70 ) to a minimum to make the 24.01.15 place to share 1,1105 , equal to a 21% downside from the main signal of the euro against the dollar 21%.

All this was made exclusively on the words as interventions related to the QE will be activated by the ECB from 1 March 2015 for purchases of government bonds amounting to 60 billion per month until September 2016. The introduction of the liquidity that tries to fight deflation in place in Europe to return to growth with a target inflation rate of 2%.

To achieve the above written, the development of the algorithm shows us that need a further depreciation of the currency of the European Union 20% about, in extreme synthesis is used by the current values ​​further down between the 20 e the 23 figure ( 2000 – 2300 Only ) .

Said it would be very simple, would be enough to sell and forget positions, but alas due to the introduction of liquidity and speculation will not be so simple. Should we expect a period of high volatility with strong downward fluctuations and sudden as unexpected flare-rise.
To better explain, the step up to now has been that lived easier ( 1,3470 – 1,1105 ) in that direction was determined and the descent was slow and continuous because it is made on the words of Governor Mario Draghi. With the introduction of liquidity change the rules of the game as well as the permanent sell there will also be important to buy movements generated in a short time. Indeed Broker and Bank, to reduce their risk on mkt in significant fluctuations that lie ahead, begin to reduce the leverage to not pay any gaps that could be created.

Quanto detto vuole essere un monito nel navigare un mercato quale quello del Forex in questo momento, because the events will have a strong multiplier that is the volatility, in this case, or operating systems inevitably experts or you risk getting hurt. Volatility is in fact a further variable to be considered, the variation of the same calculation currency to dimension a different use of the exposure, to make better informed the customer is possible at this stage to see the market between min and max weekly fluctuations between 6/8 figures that can not be sustained only with control techniques of risk management which take into account the rapid and fast changes in front of the market .

Therefore we have made some changes to the calculation of the exchange series T300 so that the algorithm is now affected by the volatility control what will be produced by the neural network, the percentage of controlled volatility will produce variations on the algorithm of calculation produced on the Cartesian and angular deviations arising
by the increase in volatility, what we will indicate appropriate spread or closures loss when movement contrary to that acquired entity will be estimated important, then in particular situations the calculation will produce the stop reverse ( stop and reversal of position or twice the position taken in the opposite direction ).
All this will be visible in the statements, it is obvious that an expert system takes advantage of the volatility with mechanisms such,in the budget to get this advantage will need to include some loss is inevitable in these market phases. Important is that the equity of the account will grow at a rate of mkt.

I hope the information provided will make it a good idea about the future movements of the mkt and create the various operators the right approach to mkt that today more than ever, can not be improvised as the risk increases significantly. We're not here to give you the same level as can be overcome in one direction and another in quickly, so the best advice is to follow expert systems able to quickly locate the changes, in case you do not want to address in this way, the mkt better take the flat position until the volatility will not be ceased.